Back in the Spring of 1987, I wrote in my sketchbook “Trying to put the Pieces together” along with some notes about using jigsaw puzzle shapes in some artwork. That idea lay dormant for about 20 years. Then in November 2006, I started wondering what would it look like if the pieces of a jigsaw puzzle were chosen randomly and painted different colors and then put together? I decided to give it a try. 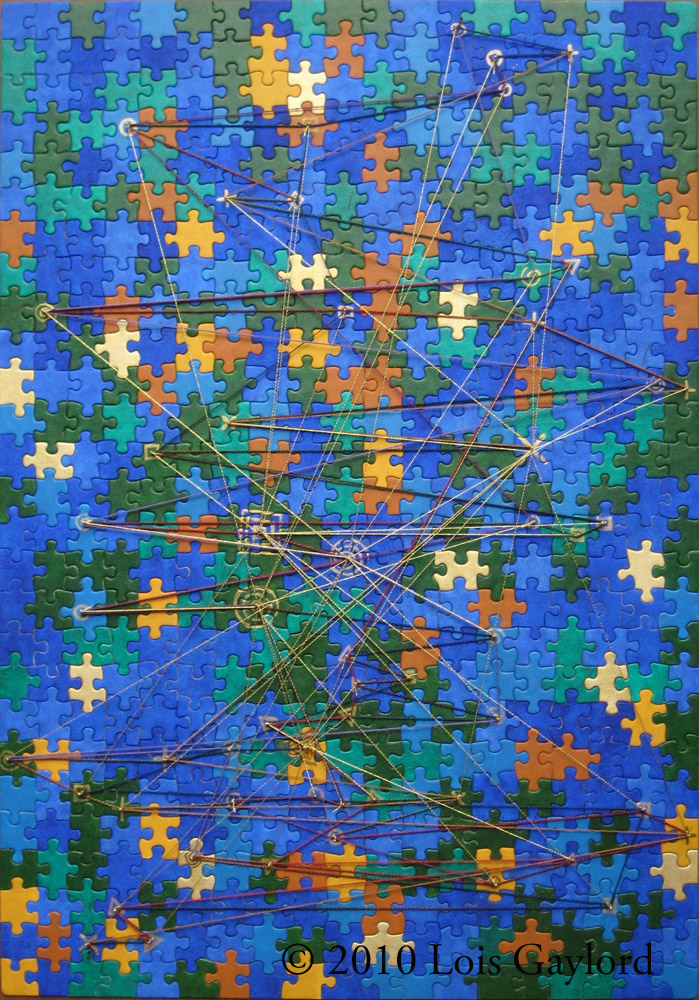 To make the process a more reasonable one, I first put together a puzzle, flipped it over and numbered the backside. After giving it a base coat of white paint and letting that dry, the puzzle was taken apart and different numbers of pieces were randomly assigned to eight different colors. Then the pieces were painted one at a time their assigned color. Now came the fun part, putting it back together and seeing the result. It was definitely interesting, I could see it had potential, but it needed something. Unfortunately I didn’t take any pictures at that point. Meanwhile, we were looking at moving the next year, so it got wrapped up and put away. 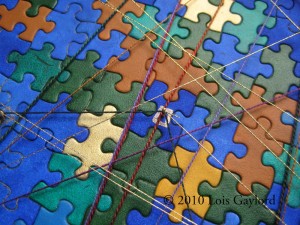 Three years later, I had an idea and pulled the puzzle out. Let’s add another random element. I disassembled the puzzle again, and this time I randomly chose 55 pieces, divided them into five equal groups, and painted each group with a different symbol. The symbols used are the 5 universal symbols; square, circle, triangle, spiral and the equidistant cross. Each symbol has many meanings and associations across cultures and spiritual beliefs. An interesting book on the subject is The Signs of Life, The Five Universal Shapes and How to Use Them, by Angeles Arrien ©1992. 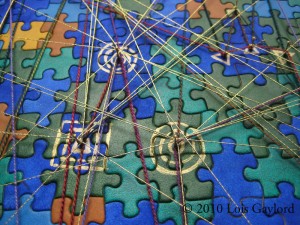 With the symbols painted it was time to put the puzzle back together again, really glad I had numbered the back by this point. Hmm… the symbols were interesting, it needed something else. What if I connected them in some way? After some experimentation on tracing paper, I decided to use threads to connect them in three different ways. The bottom layer is a linear path using variegated yarn that starts at one side of the puzzle and zig-zags from one symbol to the next across the puzzle to the other side. The symbol doesn’t matter, for as in life, where you go from one thing to the next, things keep changing as well as repeating. The middle layer is made of 5 linear paths each connecting a different symbol. Each symbol has it’s own color thread, and represents following separate paths. The top layer has a radial pattern. The symbol is the primary focus for this layer. For each symbol, I picked the one that was painted closest to the center of the puzzle, and enlarged it in some way. Gold thread was used to connect that center symbol to the others of its kind. This layer became about finding focus. 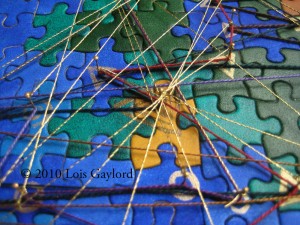 I was completing the first quarter of the Fiber Arts Certificate program while I was finishing this piece. One of the main reasons I signed up for the program was to find a focus for my work. By the end of that first quarter I realized I had been asking myself the wrong question. I had been asking myself “what can I do?” The answer was that I could do just about anything. I needed to be asking myself “what do I want to do?” Ah… a much more important and for me a difficult question to answer. I started this piece thinking about random elements and what kind of patterns would be created. I wound up looking for ways to make connections and create additional patterns between those randomly placed elements. Several people thought this piece looked like a road map. But I don’t think in a linear fashion. I think holistically, I see all the pieces and how they relate. Like a puzzle. So without intending to this artwork helped me start putting the pieces of my life work together. I am making new connections, looking at different focal points, and creating my own road map to find the patterns in my own puzzle of life.
Next month’s piece will be “Shamanic Connections”.